Challenges of the millennium

The direction of agricultural sustainability

The ongoing debate surrounding agriculture over the last 30 years has been to define what is sustainable. According to FAO, there are three dimensions of sustainability: economic, social and environmental. In agriculture, working on these challenges involves reducing poverty, hunger and increasing the productivity and profitability of small-scale farmers, peasants and indigenous people as part of the Sustainable Development Goals (SDGs) until 2030.

More than 820 million people in the world suffer from hunger and, paradoxically, there is no country free of obesity. Although, according to FAO development indicators, Brazil, Chile, Ecuador, Peru, Paraguay and Bolivia have been emblematic in reducing rural poverty, inequity is still very present in Latin America and there is a marked division between rural and urban areas, between large and small producers.

In general, farmers and indigenous people are unaware of the benefits of sustainable technological applications while transnational corporations are constantly using them. 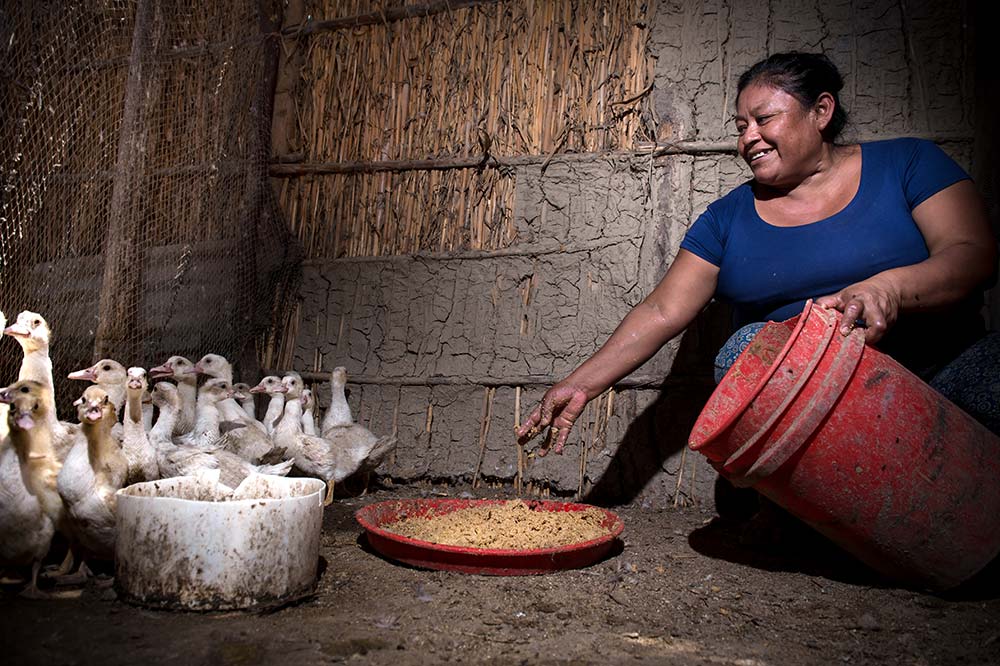 Moreover, not all biotechnology involves transgenesis. It is possible to improve foods and make them more resistant to pests with other alternative methods.

For María de Lourdes Torres, an Ecuadorian Ph.D. in molecular biology, the important thing is not to fall into the monoculture that has caused so much damage to the soil for centuries at a time when the world population to be fed continues to grow (7.7 billion people) and the food security of humanity is compromised.

Added to this is the global economic recession triggered by COVID-19. WHO estimated in 2020 that 83 million people, and perhaps as many as 132 million, began to suffer from hunger as a result of the pandemic.

While legislation in Colombia, Ecuador and Peru place limits on GMOs, governmental, non-profit and academic organizations around the world use patent-free seeds, which leads us to believe that there is the possibility of using biotechnological tools without necessarily depending on multinationals that control the transgenic seed market, such as Bayer, Corteva, Syngenta or BASF.

For example, Colombia authorized the planting of the first open source transgenic seed developed in the country, a corn resistant to pests and herbicides, developed with breeding technology whose patent had already expired.

From the academic sector, the debate on transgenics is perceived as anachronistic.

"Biotechnology has been part of our lives since before we were even aware of its existence. For example, the bread, beer or cheese that have always been consumed are the product of biotechnological techniques that precede transgenesis," explains biochemist Rosa Angélica Sánchez, former general director of genetic resources and biotechnology at Peru's National Institute of Agricultural Research (INIA).

NOTE: This explanation is general and may vary depending on the species and its type of reproduction.
Sources: Chilebio.cl and Cienciamx.com

CRISPR works like selective scissors that cut and modify any genome sequence with unprecedented precision. If using transgenics to improve products is like speeding down a highway, CRISPR is "like flying," say the technique's enthusiasts.

The tool, which brought a Nobel Prize in Chemistry 2020 to its creators Emmanuel Charpentier and Jennifer Doudna, does not involve transferring DNA from one species to another, as with transgenics, but can make plants more productive, resistant to drought or disease, more nutritious or better tasting (see the case of the Argentine potato that does not rust, or the mushroom that does not darken).

In addition, CRISPR has great potential for governments and organizations to master, as it is easy and inexpensive to use and has less regulator resistance because it does not contain foreign DNA.

For Paul Chavarriaga, leader of the Genetic Transformation Platform project of the Biodiversity International Alliance and the International Center for Tropical Agriculture (CIAT) in Colombia, the solution is the combination of both technologies: transgenesis and genomic editing, as is being done with waxy cassava. In addition, he believes that the future lies in looking inward and identifying local needs and strengthening what we already have, adapting the technology to make it useful for the country's economy.

Inevitably, the way we make decisions about transgenic crops is a precedent for new debates about CRISPR and new biotechnological techniques. Do we take advantage of them or turn our backs on them? Do we encourage our farmers to make the most out of them or do we continue to prohibit them? Either choice will have implications for the progress and welfare of our agriculture, and consequently for our populations.

Positions in sectors for and against

While some defend GM crops fiercely, others are strongly opposed to their development. Reasons (not exactly scientific) abound for both those in favor and those against. The problem is: where is the real balance of the scales?

One of the benefits of transgenic seeds is resistance to pests and insects, which is noticeable in the reduction of the number of insecticide and pesticide applications.

Transgenic seed farmers increase production and save on inputs for their crops, even on buying new seed for each crop.

Transgenic products are cheaper and more accessible, which is why they have commercial potential in national and international markets.

With transgenic seed, more food is produced than with traditional seed, therefore, the availability of food at a lower price would be guaranteed.

Some European countries have refused to plant transgenic seeds because of the risk they could represent to human health. Multinationals that commercialize transgenic seeds come from these countries and yet they are prohibited from planting there.

• Threat to the environment

Transgenics also require the use of agrochemicals so the impact on biodiversity is not zero. The effects on traditional and organic agriculture can be harmful.

• Contamination and risk to traditional agriculture

The regions considered to be the origin of native seeds run a serious risk of becoming contaminated and losing their genetic diversity. Towns declared "transgenic-free" see their traditional agriculture as being threatened by transgenic contamination.

Various sectors, including some members of the scientific community, express concern about the few studies that exist (not financed by multinationals) on the safety of consuming transgenic foods.

• Control of the business by multinationals

Farmers are subjected to the prices of the multinational companies that manage the transgenic business. In the absence of healthy competition, they must accept the conditions of these companies. 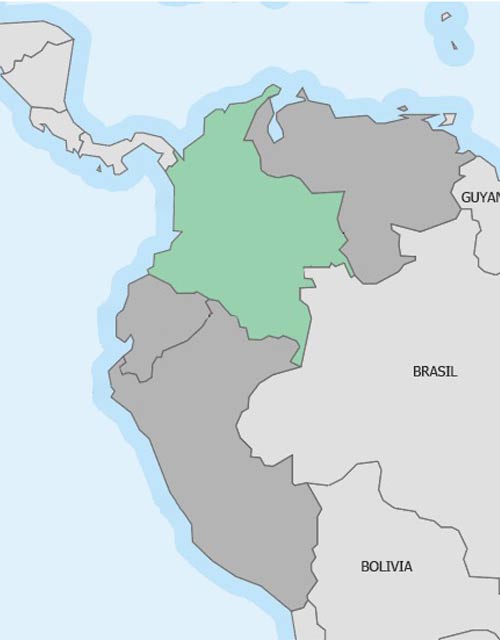 The crossroads of transgenics 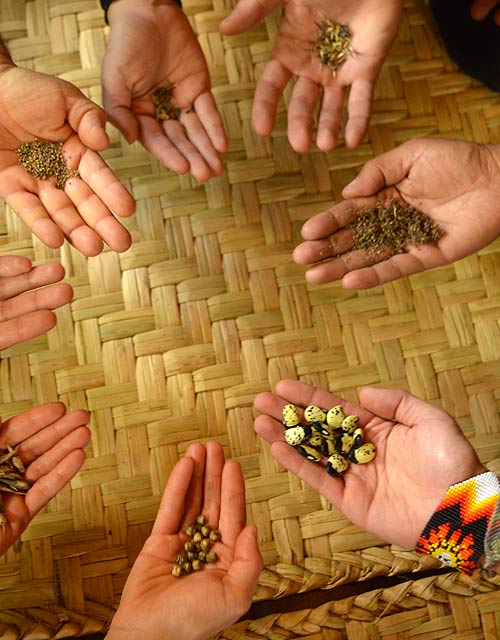 Leader in bananas, held back in research 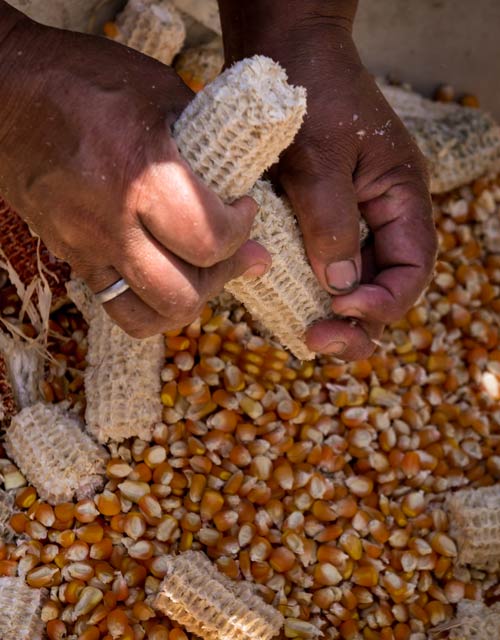 A law without field or science

This project was produced with support from the Howard Hughes Medical Institute Department of Science Education.